You've decided it's time. You've honed your craft, studied other voice actors, and you're ready to have your demo produced. Here are some tips from voice-over actor and demo reel producer, Ed Cunningham, as he talks about how an actor should prep for a voice-over demo recording session.This is a 3-part BackStage "Short Cuts" video series.

Oddity from Disney - "A Symposium on Popular Songs"

Professor Ludwig von Drake (voiced by Paul Frees) gives a concert of songs he "wrote" from Rag Time, through the Roaring '20's, and ending in the early '60's. While von Drake's segments are cel animation, the songs are portrayed in stop-motion paper cut-out animation, unusual for Disney. The singers are Skip Farrell, Paul Frees, Billy Storm, and Gloria Wood. Words and music by Richard M. & Robert B. Sherman, arranged and conducted by Camarata.

At 4min 23sec, the Professor introduces "Puppy Love Is Here to Stay" performed by Jackie Babylon and his Babylonians.

In reality, the song was performed by Billy Storm,originally released as Buena Vista 403, circa September 1962 seen and heard here from the Walt Disney Production, "Symposium on Popular Songs", released 19 December 1962. Bill Justice did the stop-motion animation. Enjoy!

Posted by Unknown at 7:13 AM No comments: 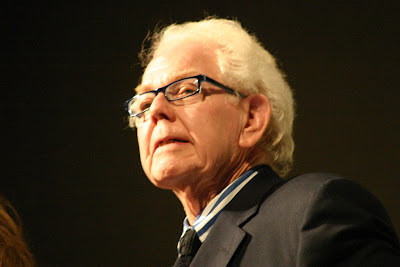 In the wake of Stan Freberg's appearance at Comic-Con International in San Diego, here's an oldie, but a goodie: Rock Around Stephen Foster!

Posted by Unknown at 6:39 AM No comments:

In his blog, Voice Actors in the News, Craig Crumpton has "An Open Letter to ‘Variety’ and ‘The Hollywood Reporter’" concerning the discrepancies between what the voice actors of "Futurama" were asking and what Fox was offering.

For an enlightening read, go here.
Posted by Unknown at 10:36 PM No comments: